The best thermometers for BBQ is one that does a great job telling us the temperature quickly.  Thermometers for BBQ can be divided into two kinds.  One kind is the leave-in thermometer that constantly monitors the temperature and relays that information to us through a monitor on the outside, or through wifi or bluetooth to an app on our phone.  The other is a handheld thermometer that should be as close to instant as possible. Open the smoker, check the temp as quickly as possible and then close it to keep on cooking.

Whether you are cooking brisket, ribs, chicken or pork butts, a thermometer is invaluable to producing quality meat. Everyone says that it’s the pitmaster not the pit that matters but a quality thermometer or two sure makes the job a lot easier.

The main thing I look for in a leave-in thermometer is 1.  How far can I go away from the smoker and still keep an eye on the food and 2.  The probe.  Surprisingly, this is the biggest source of frustration with thermometers for BBQ. Get water anywhere inside the probe and you might as well order a replacement probe now. Pro tip: Always wipe down the probe and put it away first. If it’s left out, someone will come by and throw it in the sink and you’ll be ordering a new probe before your next cook.

This is an example of probes that I do not like. They are crimped at the end which creates a seal which water easily breaks through and ruins the probe.

This is an example of a probe that I do like.  It’s sealed at the end and is water resistant. I’ve used these probes daily for multiple cooks and they usually last me a year. 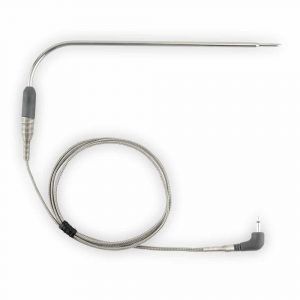 For a handheld thermometer, durability, ease of reading, and quickness in reading the temperature are the qualities I look for most. To be honest, there’s really only one company that I would recommend.  It’s the one I’ve used in my restaurants for the last 8 years and wholeheartedly recommend them. I do make a small amount if you decide to purchase any of these, but I’ve used all of them and wholeheartedly recommend them. 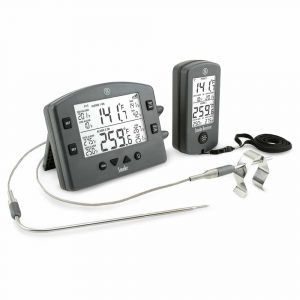 Thermoworks is a thermometer company based out of Salt Lake City, Utah.  It solely deals with thermometers and is often best in class and has won countless awards. This simply is the most durable leave-in thermometer I’ve found. It has a back-lit display with large numbers for those nighttime cooks. It has two probes which is plenty unless you are cooking chicken, ribs, and brisket all in the same cook. It has a range of around 300ft which is plenty if you are close by.  If you want to be farther, let’s say at Costco picking up some more meat for tomorrow’s cook or are cooking multiple things at the same time then I’d recommend the Thermoworks Signal with it’s 4 probe and WiFi/Bluetooth functionality. I’ve used this for around 7 years now.  Before that, I was bouncing from cheap temperature monitor to cheap temperature monitor.  Ever since I bought the Smoke though, I’ve only had to buy different ones to experiment or test out. 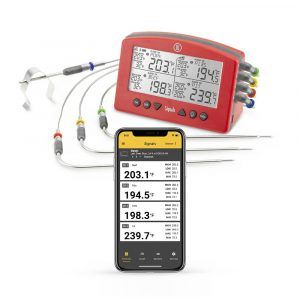 I also bought this when it first came out because it was the second 4 probe temperature monitor out there and since I trusted them, I felt safer shelling out the $200 for the Signal vs the first 4 probe monitor made by Inkbird. The Thermoworks Signal has it all, WiFi and Bluetooth capabilities, 4 probes so when I cook two briskets I can put one in each flat and one in each point(though you have to buy an extra probes for this, it comes with three meat probes and one air probes. The air probes being useful for seeing what your actual temperature inside the smoker is). I can use their app to monitor the temperature anywhere.  The best part is, it’s just as durable as the Smoke.

The new kid on the block with all the shiny toys.  This has everything packed into a large probe that monitors the meat temperature as well as ambient temperature inside the smoker. The great thing is you can pair up to 4 probes to the MEATER app on your phone. I’ve never bought this but rather used it while smoking a brisket on a Traeger at my cousin’s house.  It seems great for residential use, the only thing being the probe is too large for chicken wings and I cook a lot of chicken wings. I do recommend going for the MEATER Plus over the original due to the longer range. Depending on the thickness of the smoker, the original seems to have some issues with very low range(3-5ft) for some people.

The Best of the Rest 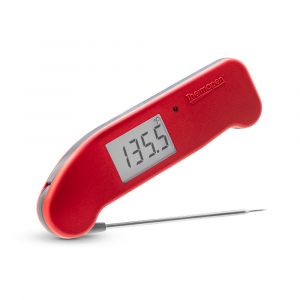 The Thermoworks Thermapen Mk4 and it’s new replacement the Thermoworks Thermapen One.  The gold standard.  If you’ve ever watched BBQ Pitmasters or any specials on BBQ you’ve probably seen a Thermapen.  It’s usually the handheld thermometer they are using to check the temperature of the meat.  It’s usually in some funky neon color and stored away in a pocket on their leather apron.

Is it the fastest handheld thermometer? Yes, I believe so.  Is it amazingly easy to read and durable? Yes. Will it give you instant credibility among Pitmasters everywhere when you pull it out?  Maybe. Is this the most expensive handheld thermometer you’ll buy for BBQ? Yes.  Is it worth it?  Undoubtedly.

When I started my restaurant we started out with two Thermapen classics(no backlit display) and they weathered daily abuse for over five years.  Unfortunately, while changing the battery in one, I overextended the probe and the wire snapped out of the probe.  I’ve since replaced and added to that collection with a couple Mk4’s. The Mk4 is definitely worth the extra $30 or so for the back-lit display and easier battery replacement. The Thermapen One improves upon that with even faster readings and easier battery replacement. Since it just came out I haven’t had a chance to get mine yet but it’s on order.  Pro tip : get a funky color.  It makes it easy to spot when you’ve forgotten where you put it down.  That’s why most of the colors available are pastels. 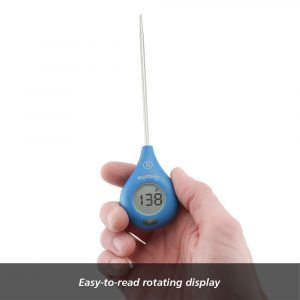 The Thermoworks Pop is the entry level thermometer for the BBQ enthusiast.  Sometimes we don’t have $100 to spend for a thermometer.  Sometimes we don’t want to spend that kind of money. This is the perfect solution. Slightly slower than the Mk4 and One at 3-4 seconds for a reading but still having the backlit display and sturdier than the other thermometers on the market. A great entry level  product from a US company.

Even after the generous warranty period if you happen to have a problem with your Thermoworks item, they have a repair service which for a nominal fee($30 for the Mk4) they will repair your item.  This is a company that stands behind its products. You can read about the repair service here.

Hi and welcome to my blog! I am Ted, a proud owner of Electric Smoker Guy.

Electricsmokerguy.com is a participant of the Amazon Services LLC Associates Program, an affiliate advertising program – it is designed to provide an aid for the websites in earning an advertisement fee – by means of advertising and linking to Amazon.com products.